Lisa Freeman was born in Toronto, Ontario and grew up in the Midwest – Michigan, Ohio, Illinois. She moved to Georgia in 1979 when she was fourteen. She’s been making art in one form or another her entire life but got more serious about it twelve years ago doing large-scale, figurative painting. “I always focus on people in some way,” she says.

Freeman had a car accident in 2006 and broke both arms. She was home two and a half months recovering. “I got back to work fairly quickly because I had to work, though they were very simple paintings at first.” Her marriage ended during that time, which is when she moved to Athens.

I spoke with Lisa Freeman in her basement studio in Athens amidst her paintings, assemblages and countless, meticulously arranged containers full of her small treasures. MK

How does an assemblage begin?

I usually start with a face. A photograph of a child. And that will be how I get into the work. Most of them are unknown and so I can do whatever I want with them. The ones that I do know – like the Hiroshima piece – will have photographs from there. But mostly they’re unknown. I’m trying to build a world for them. I work from things laying around. This was a cigar box. I always have to break things apart to make into something, if that makes sense. I used to be a cake decorator for Publix and realized I needed a cake turntable to do these, which became the whirls. I’ve always done assemblage things in-between the paintings. It was more of a release kind of thing. But I did a series of assemblages which were displayed at the show, Found, at Hotel Indigo and then they kind of morphed into the current work.

Can you take us on a little tour of Rosie’s Compass?

When I start making these I don’t have any idea where they’re going, usually. With this one, though, I kind of did.

These are actual photographs found in a North Carolina attic, just printed off. Both little boys were slave children. When I found these images 5 years ago I wasn’t doing this kind of work. I’ve always been collecting miniature things. This was the first piece that I used African-Americans in, which was kind of a big deal. It’s hard for me, as a white person, to do that. You see Rosie, with a compass rose. There’s the Emancipation Proclamation date. All around the base of it is text from the book, Beloved, by Toni Morrison. There are words inside of the marbles, which are actually underneath them. But you have to really look. One says: Seek.

There’s a map from Eatonton, Georgia, where Alice Walker is from. There are words from her and recent photos from Madison. It’s odd to me that we have statues of happy black children still out in front of people’s front yards. The Big Dipper is referencing the Underground Railroad and how slaves were able to find their way north. There’s a stamp from Canada where they’re going.

Tell me about you and Joseph Cornell.

(laughing) He was the master of assemblage. He made perfect boxes. He took care of his mom, who was ill. And I think his brother. He was kind of a hermit. He took lots of walks and gathered stuff from the streets of New York. And that’s, basically, where I get my stuff. I take walks. I get garbage. I go to thrift stores, which is really cool because then I can find all these little things that I’ve been gathering and put them in something now instead of just saving. Up until the turn of the century we really didn’t have a lot of junk. People reused, we didn’t have throw-a-way stuff, like ticket stubs. Now we have a lot excess stuff and we can make things. I studied a lot of his work, but I never really took it seriously as an art. I’m an art snob but I’m trying to get past that (laughing). Painting is the epitome of an artist. That is what you do. But I started exploring all the different avenues of assemblage. Anyway you can express yourself is art.

You’ve said that your art inspires one to “focus on the uncomfortable.”

Like the issue of slavery in Rosies’s Compass. There are still repercussions happening now. It wasn’t that long ago in the vast scheme of things. We may not have been responsible for it, but we still have to deal with our history. Jewels of Gaza is about an uncomfortable situation. They’re just children, like anybody else. 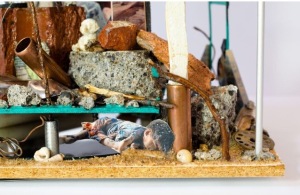 I wanted to make this one after, what was it, two years ago, when there was an increase in Israeli attacks. The little boy on the beach was killed. I needed to use that photo. There’s a photo of graffiti from Gaza. There are 6 children in this piece. They’re just caught in the middle. One section is about Palestine, before occupation, showing what was there before. The concern I have about using photographs of children today is that this kid may still be around, which is awkward. Banksy went there and left a big kitten on the beach. That’s an artist I love. Nail on the head every time. It’s strange when I build these things because I don’t have a preconceived structure, especially with Jewels of Gaza.